I know I have been promoting my KICKSTARTER a lot these past few days. But, I actually have even more awesome KICKSTARTER related matters to share! 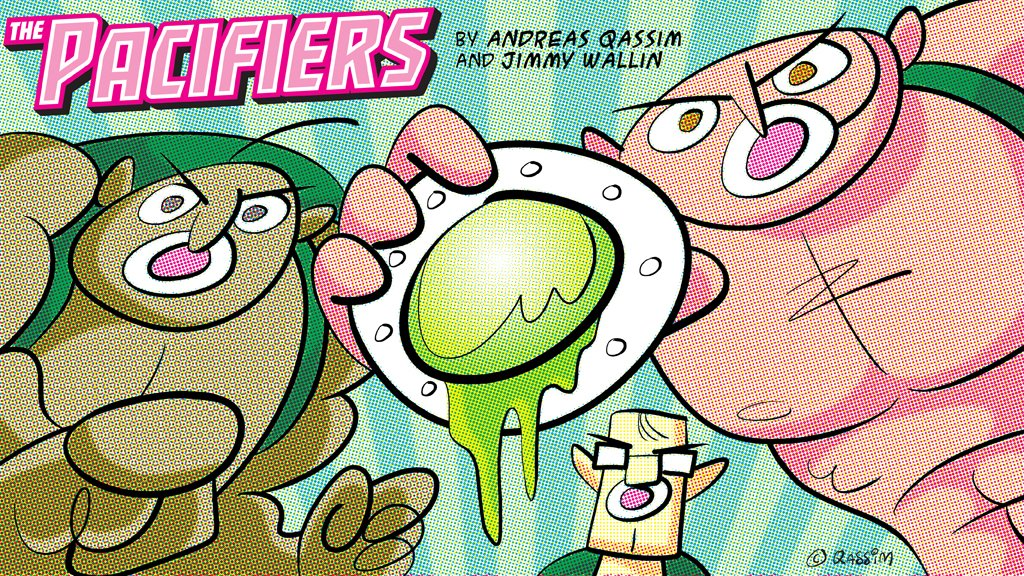 A fellow Swedish comic artist, Andreas Qassim, is currently also running a KICKSTARTER to fund the creation of two longer stories of The Pacifiers. It's a comic project with quite a unique outline. The main cast are toddlers who posess the power to transform into Rambo-like muscle babies and they fight bad guys by shoving pacifiers into their mouths!

Check it out! I think it looks amazing and far from something I've seen before. Would be great to see where Andreas Qassim and his crew (Jimmy Wallin & Alfred Beckman) can take this concept when it gets funded!

If you are curious about what the comic looks like, there is currently already one story up at the website http://www.pacifierscomic.com/ !

I Just want to inform you that there is a new RSS-feed-URL for The Din. Please, update all of your RSS-browsers/clients to the new one as soon as possible. :)

The new feed shows comic page previews and also the blog posts. Which is awesome!

The old feed doesn't show anything anymore, so... it's a bummer to stick with that one, right?

Hello everyone! I'm here to announce that my very first Kickstarter Campaign has LAUNCHED! :D

In this kickstarter I am raising money to fund the printing of the Chapter 2 book of The Din!

Chapter 1 has already been printed, so you will be able to get both the Chapter 1 and Chapter 2 books in this campaign! Both books are a total of 150+ full color pages. If you want, you can also pledge to get an original sketch of one of the characters of The Din! :)

In other news, I want to remind everyone in Sweden that I am having a table at Stockholm International Comics Festival in Kulturhuset this weekend! Stop by and say hello! :)

Here's the map of the convention!

I'd like to announce that I am soon going to launch my very first Kickstarter! Wohoo! I'll let you all know as soon as it's launched. :)

In other news, I am going to have a table at the Stockholm International Comics Festival this come weekend! Double wohoo! If you're in Sweden and would to see me, get a freebie-comic of the Prologue and look at the first proof copy of the Chapter 2 book - make sure to stop by! 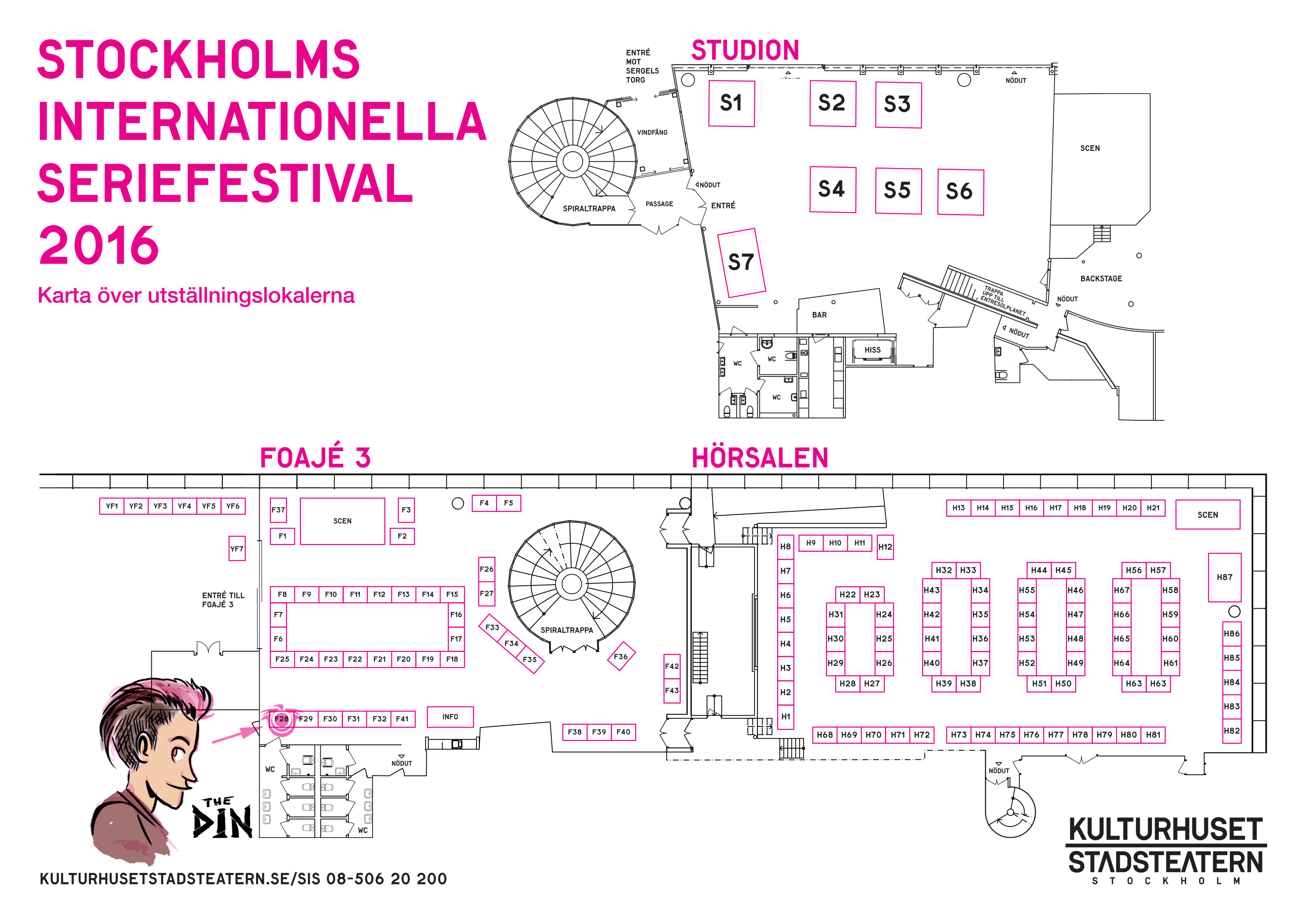 My hair looks a bit like... a My Little Pony right now.
See you there? :D

View/Post Comments
The Revisions of The Crashing/Flying Scene!
Posted April 27, 2016 at 7:40 pm

As promised, here's a breakdown of the revisions the Bike Glider Flying/Crashing Scene went through!

Some of you gave me some much needed input about this scene before it started to unfold. Just so you know; I am thankful for every thought and analysis regarding this scene, it helped me make it much better. I know what I have now is not 100% realistic, but I think it serve's its purpose (to be dramatic, fun and comical). I hope you think so too!

Keep the comments and analyzing coming! It's going to be quite a challenge to draw the real juicy flying scenes in the future. I'm always happy to hear what you think, even if I don't make changes. Sometimes the feedback will come in handy later - either in future pages or in edit-runs of old pages! :)

Anyway, so about this flying/crashing scene of Chapter 2! It's undergone a lot of revisions the past years, and I will share the major ones. The scene was short and snappy! Most of the scenes were, because the chapters were much shorter back then. My proof readers told me that making the scene a bit longer wouldn't hurt. It's a happy moment to flight-test an invention, especially one that is more advanced than a kite. It was a bit of a disappointment that it ended so abruptly.

So I went ahead and added a splash page to make the scene longer. I also added an extra panel where Gregg is grinning like mad in the air. An other reason to make these adjustments was that the comic was in need of more lighthearted stuff.

This was the result of drawing new panels and reusing old ones from the old testversion of the comic (2015 - colored 2016): This is what I had planned to post before I read the speculations regarding how well (or how bad!) the bike glider theoretically would fly. I quickly realized the version I had planned out wouldn't fly (yay, pun)!

The way I had it drawn/paced, it suddenly felt like Gregg spent way too much time in the air before crashing. I recently added Louise info-page to the scene too, while he's in the air, which was an unfortunate spot since it made the flying seem even longer. But it was the only good spot for her info-page to appear at this moment...

I shared my dilemma and a new set of change suggestions with fellow comic artists (Thx Comic Tea Chat!) and proof readers (Adrian being one of them!). Eventually ended up with this (2016 - just recently):

Got some feedback and new ideas on how to make it even better. Removed some more unnecessary panels, flipped the flying middle panel and added a disappointed Elsa.

And eventually I ended up with a draft of the version I have up today (2016 - just recently): It took a few days of removing panels, adding new panels, rearranging existing panels and extending a couple of panels. But I am happy I did it, because I think it flows much better now. It doesn't feel like he spends minutes in the air anylonger. What I am after is a few seconds, but that it feels longer in Gregg's mind. I hope I achieved something close to that. :)

An other important change that was made: Gregg now smiles after the crash (thanks Adrian) + updated line. It seems much more suitable for the kind of spirit he has. I am not sure why I drew him with such a painful face at first - perhaps because it must've hurt A LOT and I have a habit of tormenting my characters? *shrugs* I'm going to treat them better from now on! (Maybe)

Thanks for reading and thanks everyone for the input! :3 I truly mean it! Your input made me push this scene further, and for that I am grateful!

Onward to the next challenges!

Hi everyone! An other announcement!

I am most likely going to launch a Kickstarter campaign sometime in May/June! :)

It's main purpose is to print a batch of Chapter 2 books. But you will also be able to get your hands on the Chapter 1 book!

It's going to be a pretty straight forward campaign where you can add original sketches to your books and such. :) But if you have any suggestions to extra materials, I am all ears!

This is what the Chapter 1 book looked like. The Chapter 2 book will be printed in the same format. 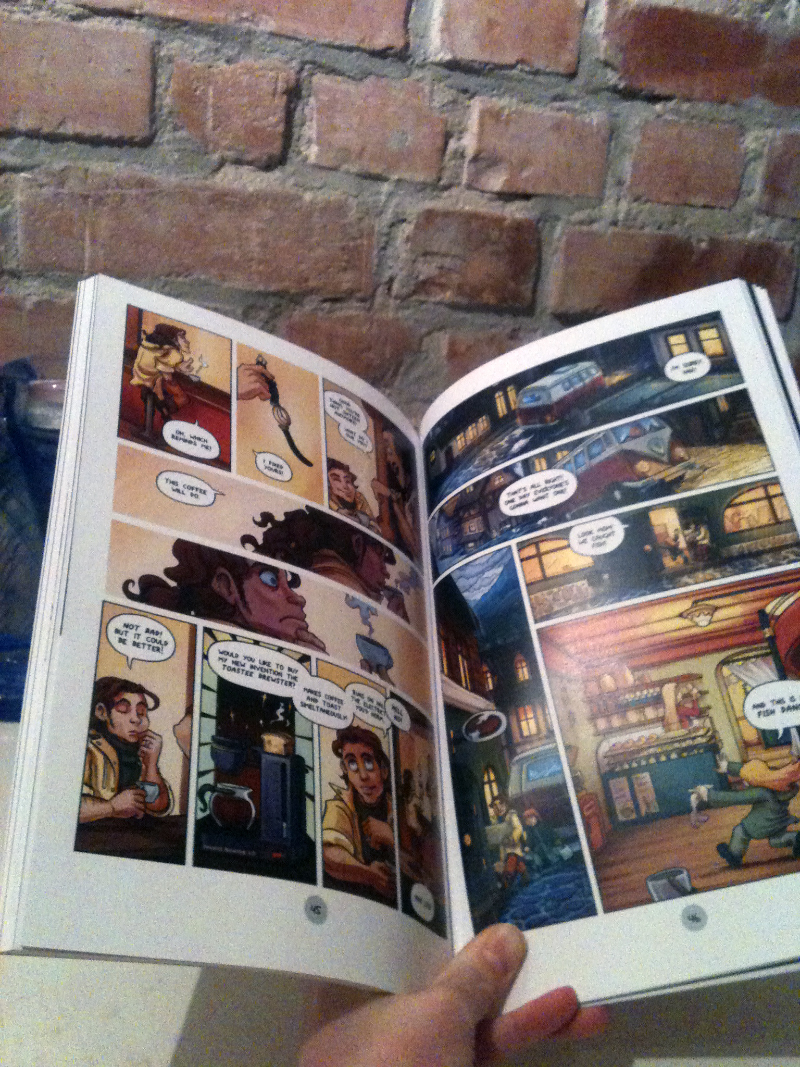 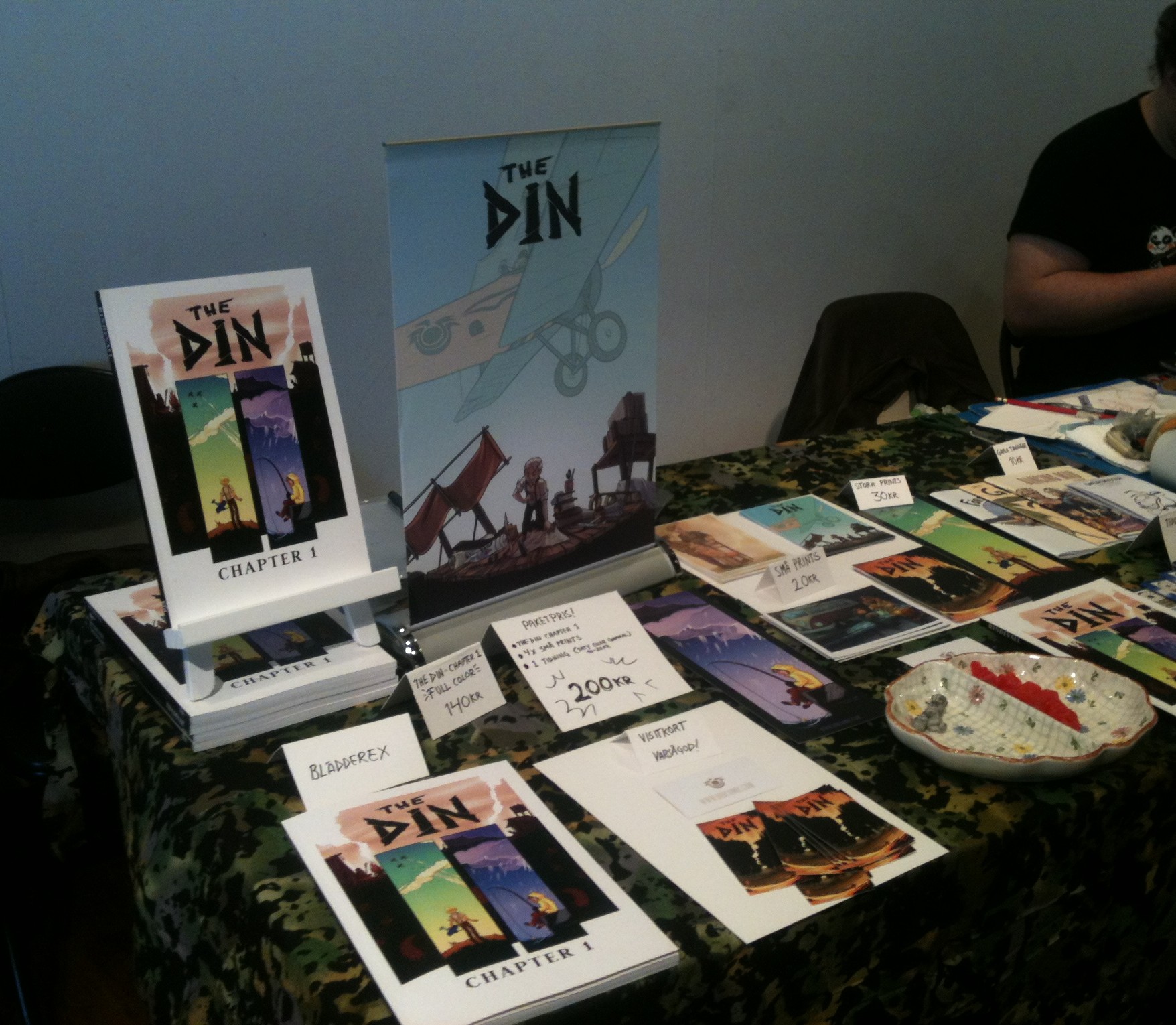 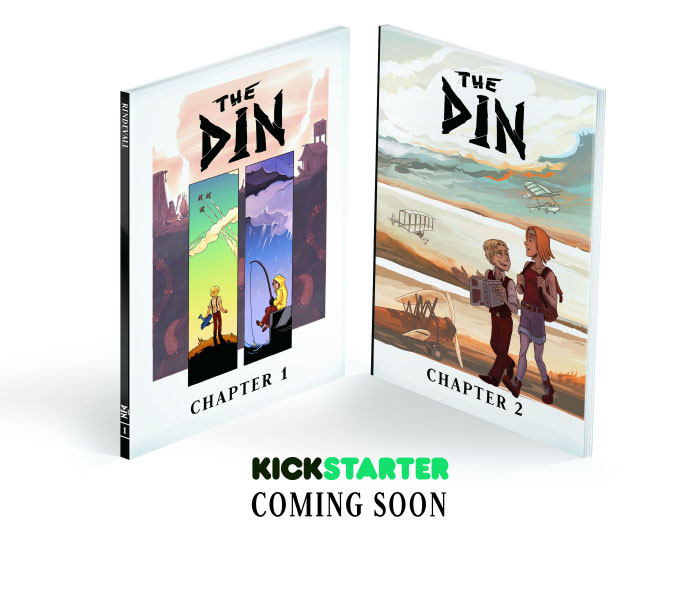 When I was at New York Comic Con last year, I bought this lovely scarf from Cari Corene! 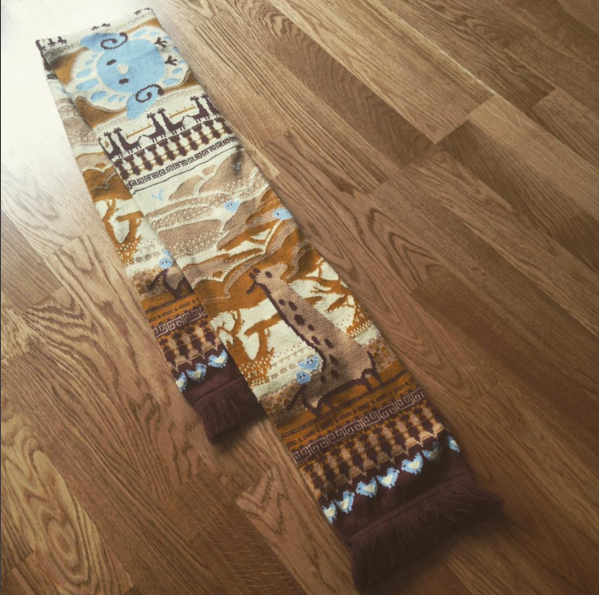 I have been wearing it a lot since then, and got tons of compliments on how lovely it is. I decided to post it on instagram just recently, and she replied and even did this cute little paint over on Gregg with the scarf on, so I thought I'd share it here!

Anyway - make sure to check out her store! Her art is absolutely amazing, blows me away every time she posts something new! And if you are able to, stop by her table at a convention. Such a lovely person to talk to~ I think she posts about what conventions she attends to over at her tumblr or instagram.

Hello everyone! I thought I would make an official announcement that I am currently working full time on The Din for 3 months. :)

I know it's much to ask for, but during this time I am in need of extra support from you readers. Here's a few ways you can help me out during these months. It will also help me create the comic in the long run!

Patreon - become a monthly supporter of The Din through my Patreon campaign. As little as 1 $ a month will make a difference!

Spread the comic - more readers always help out! If you are active on twitter, tumblr and on facebook, you can help out by spreading my update announcements for example.

Come back often - by coming back often to this website you will in fact be helping out a great deal! If you want to do something extra, leave a cool comment! :)

Vote for the comic - vote for The Din over at www.topwebcomics.com daily, and you will help me out reaching new readers.

If there is anything specific you'd like me to do during these 3 months, let me know! I currently have Chapter 2 and Chapter 3 as my main focus, but I am also wrapping up a huge image of the characters to put in the Cast section. :)

That's about it! Thanks everyone for reading~ 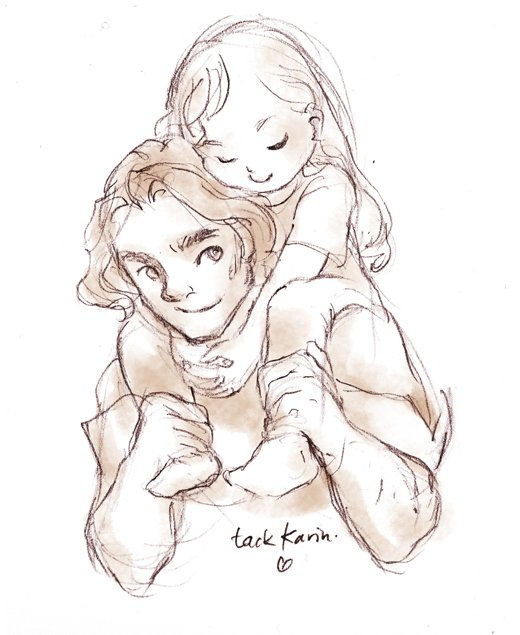 Hello everyone! Here's some extra comic stuff this week!

I drew a guest-comic page for Lho Brockhoff's The Lost Oracle a while back! There was a short chapter break and Lho asked for guest content. Since I got such a lovely piece from her I decided to return the favor! :) (+ I love her characters. So I have been looking for a reason to draw them!)

Everyone, go read The Lost Oracle! It's great and it's also available on tapastic! 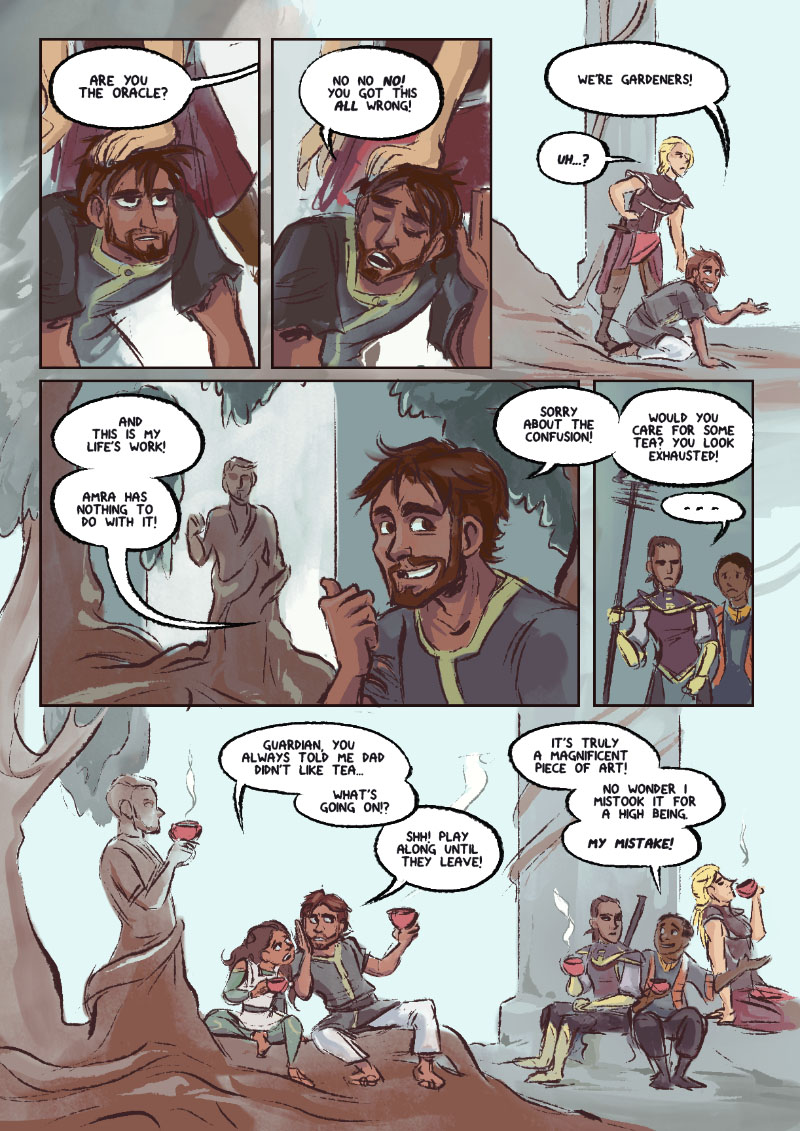